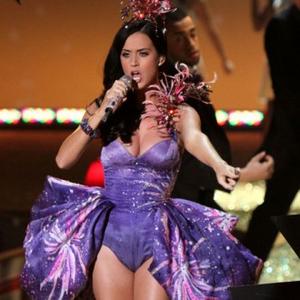 The 'California Gurls' singer - freshly back from her honeymoon with new husband Russell Brand - looked stunning as she poured her curves into a Todd Thomas low-cut purple bustier, which had a huge bustle, while she belted out a medley of her hits.

Katy also wore a yellow PVC dress covered in Pink hearts and thigh-high black boots, much to the delight of the crowd.

Model Adriana Lima opened the New York show in a giant set of wings and marked her return to the catwalk for the first time since giving birth to daughter Valentina last year.

The 29-year-old beauty admitted she worked hard so she was in top shape, saying: "To be back in shape for The Fashion show, it wasn't easy for me. I really worked very hard."

Speaking about the models, Akon said: "You see them in person, it's like a whole other thing. They're amazing, they're beautiful."