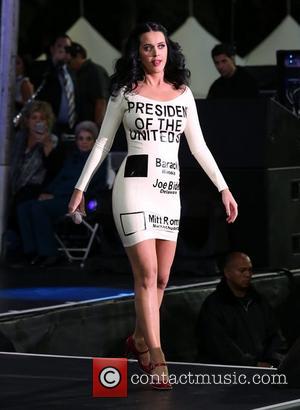 Katy Perry's skintight ballot dress is back in the news today. Unsurprising, given Americans are heading out to the polls today to back either Barack Obama or Mitt Romney for the Presidency. We're sure those still undecided will be checking back to see which box Perry had ticked on her skintight ballot dress. Probably.

Perry, 28, wore the famous dress whilst performing at an Obama rally in Milwaukee last week. The ballot style image on the front had the President's box clearly ticked, with Mitt Romney getting nothing more than a big blank space. Later, the singer took off the dress to reveal yet another skintight number, this time, a white-and-blue 'Forward' frock referencing the slogan for Obama's re-election campaign. The Fireworks singer has been one of the President's most prominent supporters in recent months, though Bruce Springsteen has perhaps worked the hardest for Obama. He's appeared at three rallies in total, though thankfully didn't wear any skintight clothing. Instead, he kept it very 'Boss' like, with jeans, a dark shirt and waistcoat. He played for 18,000 supporters at a recent rally in Madison, Wisconsin.

Meanwhile, Kid Rock has been rocking out for Romney, performing in Manchester, New Hampshire on Monday evening.

Watch Katy Perry performing in her Obama dress below: