Katy Perry Sings 'Beast of Burden' With The Rolling Stones

Katy Perry joined the Rolling Stones for their '50 and Counting' show in Las Vegas on Saturday (11.05.13), singing along to 'Beast of Burden'. 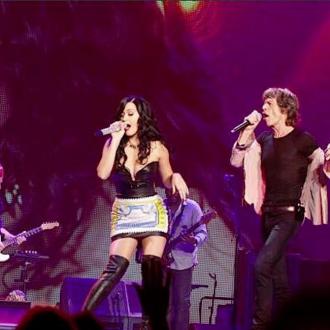 Katy Perry joined the Rolling Stones on stage in Las Vegas on Saturday (11.05.13).

The 'Wide Awake' singer surprised crowds at the MGM Grand Garden Arena when she joined the legendary rockers for their '50 and Counting' show, singing a duet with frontman Sir Mick Jagger to their iconic track 'Beast of Burden'.

Katy, 28, was ecstatic following the performance and couldn't contain her excitement on Twitter.

She added: ''Thanks for letting me be the 5th wheel last night! @Rollingstones, (sic)''.

She wasn't the only person who took part in the concert, as former member Mick Taylor also made an appearance alongside his ex-bandmates - Keith Richards, Ronnie Wood and Charlie Watts.

The quartet also posted a series of tweets accompanied by snapshots documenting their night.

One post read: ''Tonight the Rolling Stones rocked Las Vegas! They were joined by Katy Perry for Beast Of Burden and Mick Taylor for Midnight Rambler and (I Can't Get No) Satisfaction #stones50 (sic)''.

Katy's appearance follows several other big names who have joined the rockers on their landmark tour, including Lady GaGa, Gwen Stefani and Bruce Springsteen.