Katy Perry And Her Entourage Had To Walk To The Coachella Festival In California On Saturday (11apr15) When Their Van Broke Down En Route From A Brunch Nearby. 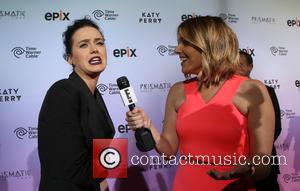 The Roar singer and her pals had just stopped by the Soho House's temporary Coachella space for a bite and were travelling to the festival site in Indio, California, when their vehicle came to a halt and the group had to get out and walk.

Photographer Janelle Shirtcliff captured the moment Perry and company realised they would not be driving to Coachella and shared the photo on Instagram with the caption: "That time our van broke down."

Festivalgoers who spotted Perry jokingly hitchhiking as she walked to Coachella claim she was in great spirits and didn't seem to be bothered by the inconvenience of the breakdown.

She was spotted all over the festival site and stood next to pal Robert Pattinson as he supported his rumoured fiancee FKA Twigs during her headlining spot in the Gobi tent.