Katy Perry has revealed some American football-themed nail art ahead of the this weekend's Super Bowl between the New England Patriots and the Seattle Seahawks in Glendale, Arizona. 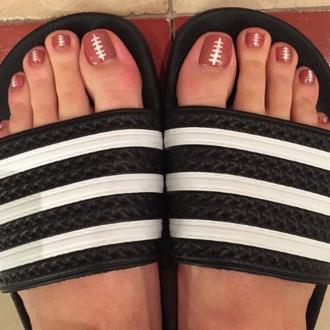 Katy Perry has painted her toenails to look like American footballs ahead of her Super Bowl appearance.

The 'Roar' hitmaker is set to perform at the prestigious half-time show during the big game between the New England Patriots and the Seattle Seahawks in Glendale, Arizona, on Sunday (01.02.15), and she has taken to Instagram to reveal her football-themed nail art.

She captioned the image: ''Even my tippy toes are ready. (sic)''

Katy has been keeping her fans up to date with her Super Bowl preparations on Twitter and recently confessed she felt nervous about her upcoming performance.

The 30-year-old star also revealed she still can't believe she was chosen to headline the prestigious gig.

Asked how she was feeling ahead of the performance, she said: ''Honestly? I feel like I've outdreamt my dream. I don't get nervous much, but I'll definitely be a little tingly inside that day.''

Katy will be joined on stage by Lenny Kravitz and will follow in the footsteps of 'Uptown Funk' hitmaker Bruno Mars, who headlined the gig last year.

'Let It Go' singer Idina Menzel will be singing the National Anthem before kick-off, while John Legend will perform 'America the Beautiful'.