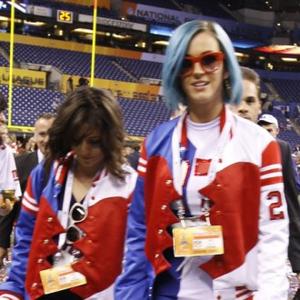 The 'Firework' hitmaker joined the team at a bash at the Marriott hotel, in Indianapolis, to celebrate their victory over the New England Patriots in NFL showpiece game on Sunday (05.02.12) and Katy was spotted chatting to team co-owner Steve Tisch and players Travis Beckum and Jake Ballard.

Although Katy was happy to celebrate with the winners, she refused to show allegiance to either side during The Game, wearing an outfit comprising of both the Patriots' and Giants' uniforms and tweeting about her neutrality.

She wrote on twitter: "He SACKED him!!! #BOOYAAA #stillneutral (sic)"

However, she was happy to support the giants after writing "Okay fine.... I ? GIANTS! (sic)"

Although one fan was quick to call her out on it writing "@katyperry oh what, after they win? ...classy (sic)."