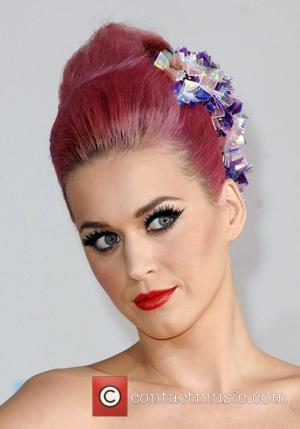 Katy Perry took the potentially risky step of mocking fashion's latest superstar Pippa Middleton during her appearance on Saturday Night Live this past weekend (December 10, 2011).
According to the UK's Daily Mirror, the Fireworks singer turned the sister of the Duchess of Cambridge into a "trash-talking, cockney-accented show-off" during a sketch with Fred Armisen (The Queen), Bill Hader (Prince Phillip) and Nasim Pedrad (Nasim Pedrad). The 'royals' were shown having a family discussion about Kate not giving them any grandchildren when Pippa (Perry) suddenly burst into the room and began to "swear like a sailor". She then started arguing with the Queen and declared, "Geezers line up to look at my arse" in an accent not unlike her husband Russell Brand's. The sketch was just one of several controversial segments featuring the superstar singer, who also mocked Christina Aguilera during a parody of the film 'New Year's Eve'. Actor Alec Badlwin, who was thrown off an American Airlines flight for playing a cell-phone game, also appeared on the show and referred to the now infamous incident. Dressed as an American Airlines pilot, the actor said, "I mean what harm would it do to let him keep playing his game. Not any game mind you, but a word game for smart people".
The episode, which featured a musical performance form Robyn, averaged a 4.8 rating - the show's highest since Charlie Day hosted on November 5, 2011.