The Disney character finally gets her own star.

Nine decades after her first on screen appearance, Minnie Mouse has finally been presented with her own star on the Hollywood Walk of Fame, presented by her biggest fan and style icon Katy Perry. It's been a long time coming, but fans are thrilled she's finally been recognised. 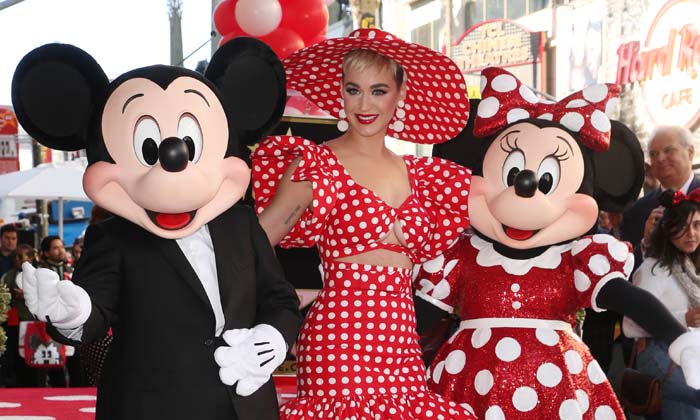 Katy Perry had the honour of presenting the iconic Disney character this coveted accolade forty years after her boyfriend Mickey Mouse was awarded back in 1978. Since then, a number of animated stars such as Donald Duck, Winnie the Pooh and Tinker Bell have been given their own star.

'This really is the best day ever', Katy said in her speech. 'Her style is the epitome of fun fashion, trust. To this day no one rocks a bow, the color red or a dot quite like her, trust me I am trying.'

'Seeing Minnie is like returning home, it is a special skill to bring joy to so many and she does it with an effortless bat of the lash', she continued. 'So today - a brief 40 years after Mickey got his star - I am delighted to honor Minnie and her magic with hers.'

Minnie's first appearance was in the 1928 animated short film 'Steamboat Willie' where she was originally voiced by Walt Disney himself. Among the feature films she has starred in include 'Mickey's Once Upon a Christmas', 'Mickey's House of Villains' and 'Mickey, Donald and Goofy: The Three Musketeers' - and she even had a very brief cameo in 'Who Framed Roger Rabbit?'.

'Minnie is one of the most universally recognised animated characters in pop culture today, and her timelessness allows her to transcend boundaries and appeal to a multi-generational range of consumers', said Disney executive Josh Silverman. 'From young adults who connect to her individuality, style and flair, to adults who have gravitated towards her classic personality and look for decades, to the children who currently see her on 'Mickey and the Roadster Racers,' Minnie's appeal reaches fans of all ages.'