Katy Perry jokingly promised to have sex with whoever bought her signed guitar at the American Foundation for AIDS Research (amfAR) 'Inspiration Gala'. 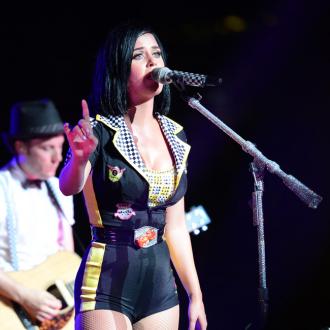 Katy Perry promised to have sex with whoever bought her signed guitar.

American Foundation for AIDS Research (amfAR) 'Inspiration Gala' at Milk Studios in Los Angeles last night (11.10.12), and also pledged to take the winner for a night at gay bar The Abbey.

'Girls Gone Wild' creator Joe Francis launched the bidding at $10,000 but he was no match for New York Giants owner Steve Tisch, who won with a $32,000 pledge.

Katy quickly ran over to Steve, hugged him and joked: ''I'm going to have sex with you.''

The brunette beauty - who has been romantically linked with Florence + the Machine guitarist Rob Ackroyd and John Mayer since her marriage to Russell Brand ended last December - closed the evening with a five-song performance, which included her hits 'Wide Awake' and 'Firework'.

Before singing a cover of 'I Can't Make You Love Me', she said: ''This song needs no introduction.''

The charity event - which was hosted by Chelsea Handler - raised over $1.3 million for the AIDS organisation.