Singer Katy Perry has hired a cat shrink to work on her pets' bad behaviour. 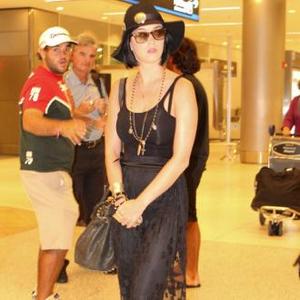 Katy Perry has hired a cat shrink to work on her pets' bad behaviour.

The singer - who recently divorced comedian Russell Brand - is having issues with her felines.

A source told the Daily Star newspaper: ''Katy is getting really worried about her cats and the way they've been behaving lately. In the last couple of months they've been disappearing for hours and aren't responding to her like they normally do.

''She thought it may be a reaction to all the building works and the renovation going on in her home in Hollywood, which is getting a huge makeover.''

The insider continued: ''So when she heard about cat behaviour professionals through a friend, she decided to give it a go.

''The cat whisperer is now working with her cats to communicate with them and calm them down.''

The owner of Kitty Purry and Krusty The Cat thinks the plan is worth the money.

The source said: ''Katy sees her cats as more like friends than pets, so she didn't think twice about hiring the cat whisperer.

''She often talks to Kitty and Krusty when she's feeling down, and they always manage to cheer her up.

''The fact they've been acting weirdly has really bothered her. She doesn't mind how many sessions she has to pay for, she just wants things back to normal.''

She named her two fragrances Meow and Purr, and devoted a whole character to Kitty Purry in her successful 'California Dreams' tour.

The 'Firework' singer adopted Krusty The Cat with 37-year-old Russell in 2011 and won custody of the pet after their split earlier this year.