Katy Perry threw her favourite pair of gloves into the crowd as she performed at the Rock in Rio festival on Sunday night (27.09.15). 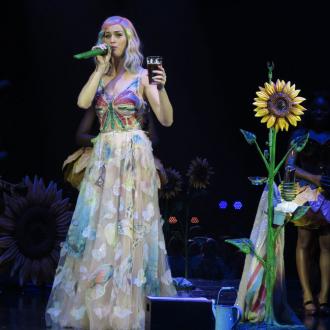 Katy Perry gave away her favourite gloves to one lucky fan on Sunday night (27.09.15).

The pop superstar was performing at the Rock in Rio festival in Brazil and she got so caught up in the moment as she sang for her passionate fans she threw her much-loved gloves - which she has worn for around 143 concerts - into the crowd.

She posted on Twitter: ''Was feelin it so much tonight that I threw my gloves that I've been using for 143 odd shows in the audience! To whomever caught them... (you're on fire) (sic)''

It was the first time the space spectacle had occurred for 33 years and made the moon turn blood red in colour - due to sunlight being scattered by the Earth's atmosphere - and appear 14 percent bigger and 30 percent brighter as it was only 226,000 miles away from Earth.

The 'Roar' hitmaker tweeted: ''Me possessed by the super moon and 100k people in the audience tonight giving me life! #RockInRio2015 #ilookhungry (sic)''

Other acts to perform at the festival include A-Ha, Sam Smith and Rihanna.