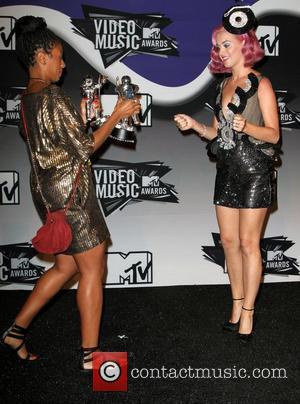 Katy Perry has dressed up as her idol Freddie Mercury to raise money for the late star's charity.
Fans of Mercury are expected to don replicas of the Queen star's flamboyant stage outfits alongside his bandmates Brian May and Roger Taylor at a London hotel on Monday (05Sep11) to mark what would have been his 65th birthday - and Perry has joined the party.
The I Kissed A Girl hitmaker, who has long cited the rocker as the biggest influence on her musical career, wears a moustache, cropped wig and bright yellow jacket to promote the Freddie For A Day campaign, which is raising money for the Aids charity the Mercury Phoenix Trust.
Mercury died from Aids-related pneumonia in 1991 at the age of 45.