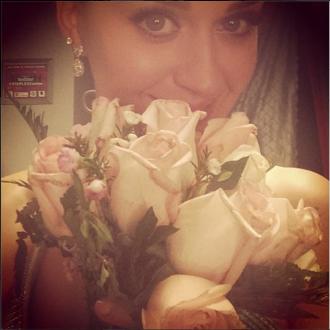 The music awards ceremony saw 34 gay and straight couples married during a performance of equality anthem 'Same Love' by Macklemore and Ryan Lewis and the 'Dark Horse' singer caught a bunch of flowers thrown by one bride - which tradition dictates means she will be next to marry.

Katy - who has dated guitarist John Mayer for two years - later posted a picture on Instagram of her with the bunch of white roses, and wrote: ''Congrats to all the #samelove couples tonight. You had me in tears of joy for y'all! Also... Look who caught the bouquet!!! #okuuuurrrr (sic)''

Speculation the couple could walk down the aisle has already been sparked by John, 36, after he started referring to Katy - who was married to Russell Brand from 2010 to 2012 - as his ''wife'' when they appeared on TV together in December.

A source said: ''He kept calling Katy his wife. He said things like, 'I just do whatever the wife says,' and then the both of them would laugh.''

Meanwhile, Macklemore and Ryan Lewis - who took home four Grammys - and Madonna, who also appeared, singing 'Open Your Heart' during the mass wedding, have been praised by gay rights organisation GLAAD for their groundbreaking performance.

GLAAD President Sarah Kate Ellis said: ''When such a critically acclaimed and popular rap artist puts marriage equality center stage at one of the biggest events of the year, it is the latest in a long line of signs that our nation not only accepts, but celebrates the love and commitment of gay couples today.''