Celebrities including Katy Perry, Alicia Keys and Anna Wintour attended the CHANEL presentation at the Grand Palais at Paris Fashion Week this morning (06.03.12). 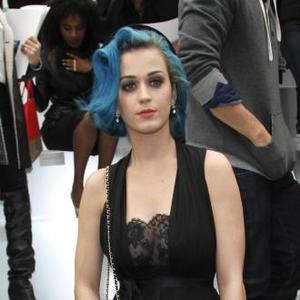 Designer Karl Lagerfeld sent out models - including Miranda Kerr, Stella Tennant, Lindsey Wixson, Lily Donaldson and Cara Delevingne - in alien-inspired make-up with over-embellished brows and hair in tight pony-tails to show off his designs which included a series of boucle suits.

Other highlights at the catwalk presentation at the Grand Palais - which saw the models emerge from a crystal cave -included lurex and mid-length silk skirts in Jewel tones and printed cigarette trousers.

Meanwhile, the brand's signature tweed jackets received a modern makeover with hoods while slouchy jumpsuits and jacquard parkas were also evident on the runway.

The designer stepped out of the crystal cave at the end to applause from the appreciate audience.

Meanwhile, P. Diddy arrived half-way through the Hakaan show but was quickly seated in The Front row next to French Vogue editor Emmanuelle Alt.