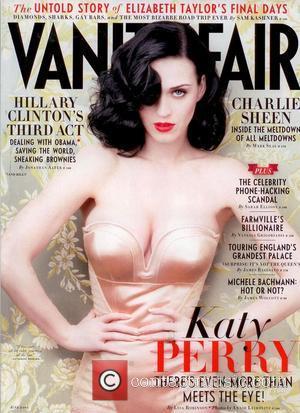 Picture: Katy Perry appears on the June 2011 cover of Vanity Fair magazine USA - June 2011 Supplied by WENN does not claim...

Former Bikini Kill rocker Kathleen Hanna has taken aim at Katy Perry, Lady GaGa, Jason Mraz and James Blunt in a new CNN rant.
The outspoken feminist, who is married to Beastie Boys star Adam 'Ad-Rock' Horowitz, was promoting revived band The Julie Ruin when she was asked what she thought about Lady Gaga and Perry, prompting a rant about their modern pop feminism and sing-a-long gay rights messages.
She said, "Is it really that different when it's a skinny white woman in a bathing suit singing these things? None of these women ever wear pants, first of all. Second of all, just because you're wearing a goofy hat doesn't make it performance art.
"I mean, that's just my feeling about it. A lot of the music just sounds like bad Euro disco... I Kissed A Girl was just straight-up offensive. The whole thing is like, 'I kissed a girl, so my boyfriend could masturbate about it later'. It's disgusting.
"It's exactly every male fantasy of fake lesbian porn. It's pathetic. And she's not a good singer."
Hanna then turns on the boys, adding, "I think Jason Mraz is horrible... Jason Mraz and the new James Blunt song is the worst thing that has ever been created on the face of the Earth."