It's fairly apparent that Katy Perry writes the majority of her material with her tongue in her cheek, and one eyebrow archly raised (little finger raised to pursed-lips = optional). So it's only fair that listeners / fans / disaffected downloaders view this album with the same detached cynicism that no doubt led to Teenage Dream being re-released in the first place. 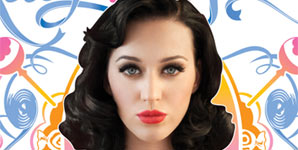 Perry and 'her people' have essentially adopted the polar opposite business model that Nicki Minaj displayed with the recent release of Pink Friday: Roman Reloaded, which contained 21 tracks. Minaj could quite easily have profiteered from two album releases with that amount of material. Instead, she decided to pack it all into one tasty bumper release; a discount purchase - allowing her fans to buy in bulk in times of hardship.

This re-release of Teenage Dream, though, falls firmly into the time-old tradition of getting as much cash out of dedicated fans as possible, for as little effort as possible. Still, there's nothing like a bit of tabloid coverage to spark interest in an artist music and Perry's recent split from British comedian Russell Brand 'just happens' to be the hamster in the wheel for this latest cash-in. Anyone expecting anything more revolutionary than a straight re-release with a few bonus tracks tacked onto the end will have to go look for a revolution elsewhere (try Nicki Minaj's wardrobe.?) because it is just that.

To recap for those that haven't heard the Teenage Dream album in the first place, it starts off with The Big Hits. The polished & preened bubble-gum pop of 'Teenage Dream', the NRG-pop of 'Last Friday Night' and the bombast of 'Firework.' Then, it's that one that made the headlines for being a bit rude, 'Peacock.' That's followed by the 'says it's Katy Perry, could well be written by Linda Perry' of 'Circle the Drain,' the spring-break teen ballad 'The One that Got Away' and the future-pop of E.T. Teenage Dream was then topped off with some songs that show off Katy's softer side, but weren't deemed strong enough for radio and 'Not Like the Movies,' which she wrote when she started dating Russell.

The important bit here is the 'bonus' tracks, though, because that's what supposedly makes this version of Teenage Dream the must-have for any discerning Katy fan. Anyone hoping for new material will have to make do with the latest single 'Part of Me,' as well 'Wide Awake' and 'Dressin' Up,' presumably leftover tracks from the original sessions for Teenage Dream that didn't make the final cut (which begs the question - why are they included here).

Essentially, once you get to the bonus tracks, it's like being stuck in a Katy Perry-soundtracked Groundhog Day. It's a chance for her to display the contents of her little black book, with guest spots from Kanye West (E.T.), Missy Elliot (Last Friday Night) and Snoop Dogg (California Gurls - come on, we've all heard that one already, right!?). And if the sense of repetition weren't already enough, there's a seven minute mega-mix, for those of you that are so thoroughly indecisive that you need to listen to all of her tracks at once, compiled into a horrific day-glo mess.

Teenage Dream was a pretty nifty album. It showcased all the best bits about Katy Perry: her saccharine voice, sharp and crisp, perfect for the irreverant pop music nestling underneath it. The problem isn't Teenage Dream. The problem isn't Katy Perry. The problem is the decision to stick a bunch of tracks that would have made perfectly good B-sides (though admittedly, the very nature of the 'B-side' is nearing extinction in the world of pop music) onto the end of Teenage Dream, turning a perfectly succinct pop album into a terrible nightmare of repetition and fatigue. Calling the album The Complete Confection is, of course, a terrible ruse. It was never incomplete in the first place and these additions have been scraped from the bottom of Katy's pick 'n' mix barrel, leaving a pretty sour taste in the mouth.