In the run-up to the release of 'Prism', Katy Perry promised fans and press alike that her fourth studio album would not be a sequel to the bubblegum pop of 'Teenage Dream', as the singer claimed to have adopted a more mature sound during the recording of the album. Whether she actually followed through on these promises would have to be seen, but KP has always had the potential to do something special with her work and on 'Prism' she could have given reasonable cause to be considered alongside history's finest pop singers. What unfolds instead is unfortunately nowhere near the standard she should be setting herself and so another sub-standard release is set adrift into the sea of disposable pop albums. 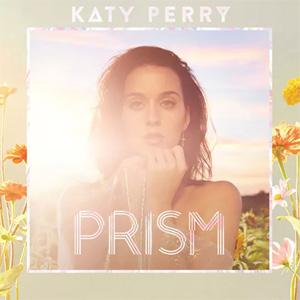 Things have changed, but at the core this is the same manufactured pop that featured so prevalently on her previous releases. On the whole, her songs have lost the summery charm found on her last album, in place of a generally one-dimensional collection of power pop anthems and ballads. She can hardly say she's matured because she's not challenging anything, only changing her preferred singing approach. She continues to follow that steady trail down the path to pop mediocrity where the only side shows are a collaboration with Juicy J - the only collab. on the album incidentally - and the occasional pop anthem that doesn't really stand too far from the pack anyway.

Her singing is pretty good throughout the album, even though the formula for the LP does not change too often, but when the songs do perk up Perry always accompanies the rare curveballs with elegance and veritable ease. Her vocal chops have the potential to front a challenge to the pop order, but she never really gets the chance to try out something distinctive and worthwhile here.

In all, there is a general blandness throughout the album as one apathetic pop ballad reels past another on the conveyor belt of mass-produced throwaway chart fodder. Joining forces with producers Dr. Luke, Max Martin and Cirkut for the bulk of the album, they occasionally give Katy something a tad risqué to play with; her work with Juicy J on 'Dark Horse' being one of the best examples, giving Perry one of the few occasions where she can demonstrate her vocal dexterity in making a practically trap-based backing track work for her favour. Luke, Max and Cirkut do handle a large chunk of the production duties, with 'Dark Horse' and at certain points on 'International Smile' and lead single 'Roar' being the best results from their work together. Other than this, there aren't exactly any other noteworthy tracks from the threesome. Swedish dance maestros Klas Ahlund and Christian 'Bloodshy' Karlsson pitch in on a few songs, none of which offer the album any girth, and modern pop studio staples Greg Kurstin, Sia Furler and Greg Wells step in for the album's closing tracks yet they never challenge Perry to step out of her comfort zone. Stargate's Tor Erik Hermansen and Mikkel Storleer Eriksen and Benny Blanco do offer something a little ear-catching with 'This Moment', but nothing that has any kind of unique appeal.

The three bonus tracks, bringing Kurstin, Wells, Stargate and Blanco back into the production seats and seeing John Mayer and Emeli Sandé helping out on the writing process for songs 'Spiritual' and 'It Takes Two' respectively, don't really offer any break from the norm of boring pop music either.

'Grace of God' is much more introspective than the rest of the album, which can be owed to Perry's ideas of progressing and trying something new with 'Prism'; although she doesn't exactly hit upon anything particularly original or exciting on this track, nor any of the others. This is probably the direction Perry will want to head in when she gets back from touring in support of 'Prism' and recording her next cyclical release. If KP keeps on churning out one insipid release after the next, it won't really matter what mood she adopts for album number five, because it will more than likely be a thinly veiled replica of anything else in Katy's back catalogue. Or maybe she will actually try something of note.