Katy Perry - One for the Boys Album Review

Review of One for the Boys Album by Katy Perry

Review of Katy Perry's album One For The Boys. 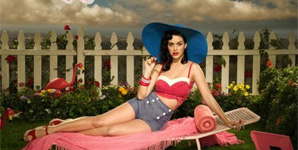 Katy Perry is the new golden girl of American pop music. She has had number one hit records and an enormous amount of press. Now she has come to dominate the UK charts. Her first single stormed to the top of the charts on Download figures alone and now she is unleashing her debut album 'One For the Boys.'

She is, essentially, a ballsier, more outspoken and definitely more credible version of Avril Lavigne. Whereas Lavigne's image is an effort you get the impression that Perry is simply being herself.

'One For the Boys' is a pure pop album. Seemingly the only topic covered is love: finding, having, losing and hating it. Oh, and kissing a girl. It's hardly intellectually challenging and at times her lyrics verge on laughable, 'I can belch the alphabet, double don't dare me.' (on the title track) However, every so often a gem of a pop song appears. 'Thinking of you' is a high quality ballad while 'Waking up in Vegas' is so catchy it's difficult not to like it.

Despite the odd likeable tune it is the shamefully poor songs that stand out on the album. 'Ur so gay' is a painfully embarrassing dig at indie boys in bands and despite the accolades 'I kissed a girl' is lyrically empty and based around a beat used many times in today's pop songs. I'd imagine it was the name rather than the quality of the track which propelled it to number 1 in the charts.

The album also loses it's way half way through. The strong songs seem bunched together at the beginning of the album and the last four songs fail to grab any interest from a listener. Essentially they are fillers and any hope of enjoying the album ends half way through.

Katy Perry is definitely nothing new. She fits nicely into a genre of outspoken female singer songwriters such as Lilly Allen and Kate Nash. However, hype can do a lot for an artist and she has plenty of that. 'One For the Boys' is sure to catapult her to the very top of the charts on that alone.