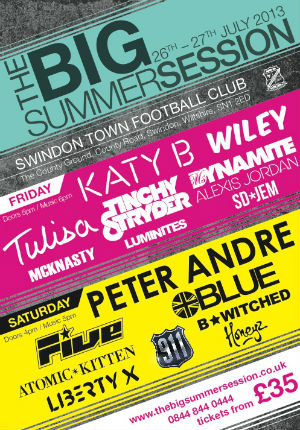 Peter Andre, Katy B, Wiley, Tulisa, Five and Blue are just some of the sensational names lined up to play THE BIG SUMMER SESSION at Swindon Town Football Club on 26th and 27th July 2013. For two days some of the biggest names in dance and pop come to Wiltshire for the best summer party in town.

Tickets are on sale priced from £35 per day and there will be a special limited two day ticket for £60.

Katy B and Wiley headline the first night, both underground dance artists who have emerged as superstar chart acts with their countless hit records.  The bill also includes solo star Tulisa who emerged from her former band N-Dubz as an accomplished singer in her own right.  Grime rapper Tinchy Stryder and smooth Brit Award/Mercury Music prize and Mobo Awards winner Ms Dynamite will also appear as will American Idol pop and R'n B star Alexis Jordan. Britain's Got Talent stars, McKnasty and Luminites will open the show alongside SD*JEM.

Internationally famous as a TV personality, Peter Andre's first love is music and with hits all over the world he will be celebrating the tenth anniversary of his first UK hits at this show.  He is joined by some of the best names in UK pop who all recently reformed for the hit TV show The Big Reunion:  Five, Blue, Atomic Kitten, B*B*witched, 911, Liberty X, and Honeyz had amazing chart success between them and the TV series aired earlier this year ensured their following tour was a sell-out.  Expect tune after tune!