Leandro Penna reportedly proposed to Katie Price on Christmas Day (25.12.11), but she is yet to give him an answer. 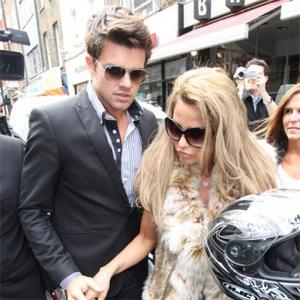 The 25-year-old Argentinean model - who dated the 33-year-old reality TV star for several months in 2011 after meeting her at an Oscars party in February - is thought to have popped the question to the mother-of-three at her home, but she is yet to have given him an answer.

According to The Sun newspaper, Katie told a friend: "Leandro came to mine on Christmas Day and asked me to marry him. It was a massive shock and completely out of the blue. I don't know what to do."

The friend added: "For once Katie actually sounded a little guilty. Leo is desperate to get back together with her and doesn't care she has been pictured out with other men since they broke up.

"He holds a flame for her and obviously believes asking for her hand in marriage will sweep her off her feet. Unfortunately he does not feature in Katie's plans."

Leandro was seen carrying Katie into a taxi on Sunday night (01.01.12) after a "raunchy" night out at London's Kassaba Lounge.

A source told the Daily Mirror newspaper: "It was quite raunchy. They kissed on the dancefloor during the night. They were very smoochy with each other.

"Things have been hotting up between them for a few weeks. The party on Sunday had a bikini theme so there were lots of girls in skimpy swimwear but Leo only had eyes for Katie.

"They stayed until about 3am, when Leandro ended up carrying her out to the car."

Katie was recently romantically linked to rugby star Danny Cipriani and last month she was said to be spending more time with ex-husband Peter Andre - who have two kids, Junior, six, and four-year-old Princess Tiaamii, together - for the sake of their children.

Last night (02.01.12), a spokesman for Katie - who also has a nine-year-old son, Harvey, from a previous relationship with retired soccer player Dwight Yorke - said: "She remains single."