Katie Price lashed out at Kelly Brook on Twitter for mocking her marriage to Kieran Hayler and warned her that Danny Cipriani will never be faithful. 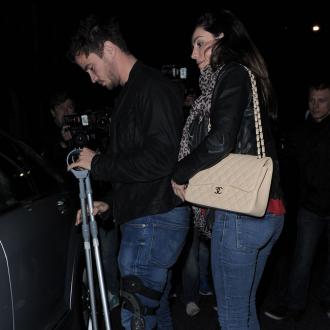 Katie Price has warned Kelly Brook that Danny Cipriani will never be faithful to her.

The glamour model, also known as Jordan, reignited her bitter war of words with the TV presenter, 33, on Twitter on Tuesday night (28.05.13), claiming the rugby star is always trying to contact her, days after Kelly mocked her recent marriage to Kieran Hayler on 'Celebrity Juice'.

The 35-year-old mother-of-three lashed out at Kelly, writing: ''IAMKELLYBROOK pick up the phone if you hav a prob instead of hiding behind a tv screen to bully me!

Katie's comments come after Kelly made fun of her third marriage on 'Celebrity Juice' on Thursday (23.05.13), when host Keith Lemon asked the panel: ''What did Katie Price do for her husband on their wedding day?''

Kelly replied: ''Did she burn my calendar hanging on his wall?''

When a fan tweeted Katie about the joke, she replied: ''I'm sure kelly wouldn't be laughing if I said the things Danny Cip said to me about her in the bedroom when I was with him hahaha (sic).''

Kelly then hit back and implied that she was in touch with Danny, when he briefly dated Katie in October 2011.

She wrote: ''No but I did laugh when he turned up at my house driving your car the next day ;) I don't think you know anything.''

The models have been embroiled in a bitter feud since Kelly reunited with Danny in February and Katie called her a ''heffer''.