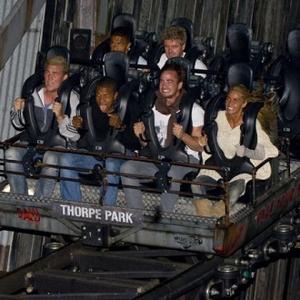 The 33-year-old former glamour model - who recently split from her Argentinean model boyfriend Leandro Penna because of a language barrier - was seen leaning in for a kiss with the hunk, the former partner of Kelly Brook, after leaving a friend's home in south west London the morning after.

Katie is said to be smitten with handsome Danny - who, at 23, is 10 years younger than her - and especially his "succulent" thighs.

A source told The Sun newspaper: "She thought his thighs were succulent. But she only got his number a couple of months ago and started bombarding him with texts. Pals have been urging her to forget the model and football types, saying rugby guys were much more reliable."

Earlier in the evening, Katie and Danny were spotted cavorting with a group of friends at a 10th anniversary Celebration of Fright Night (www.thorpepark.com/frightnights) at theme park Thorpe Park in Surrey, South East England.

Although arriving separately, the pair soon began enjoying the thrill-seeking rides together, including SAW - based on the horror film of the same name - on which they cosied up next to each other.

A worker at the park said: "Danny looked pretty freaked out on the rides, screaming his head off ... They seemed to be enjoying each other's company."