At the photoshoot for her new TLC show 'Katie Price's Pony Club', she also drew an angry reaction from PETA for dressing her horse up like a unicorn.

Katie Price has rather incredibly managed to come under fire for two reasons stemming from the same incident: firstly, for “beautifying” her horses for a photoshoot ahead of her new reality show; and secondly, for putting her children into the TV spotlight by allowing them to be in said show.

The former glamour model had previously said that she would protect her five kids from the publicity she attracts by not allowing them to be seen on television anymore. However, at the launch of her new TLC show ‘Katie Price’s Pony Club’, she told The Mirror on Wednesday (April 27th): “Well, I decided that years ago, but their dad still continued to use them in his reality show. Now they’re old enough to say if they do or don’t want to do it.” 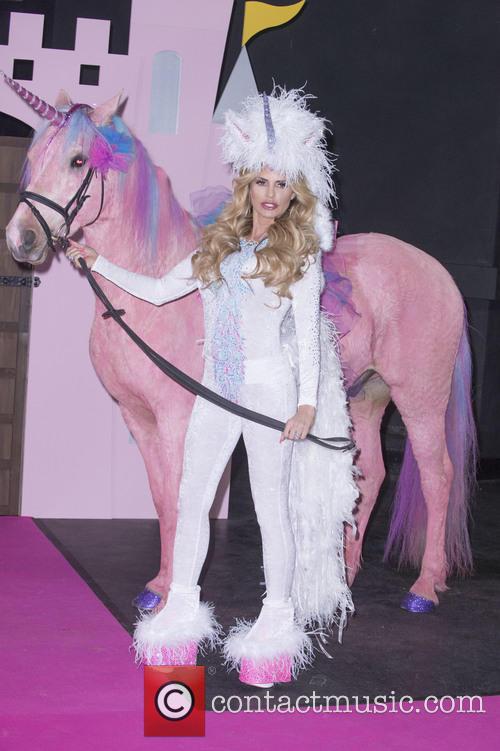 Katie Price at the photoshoot for her new TLC show

Furthermore, she drew criticism from animal rights campaign group PETA for spray-painting one of her horses pink and dressing it up as a unicorn – to match her own rather ridiculous costume and those of her husband, Kieran Hayler, and Junior and Princess, whom she roped in to help her at the press shoot.

More: Katie Price says she and Peter Andre should still be married

The organisation’s director Mimi Bekhechi slammed the 37 year old entrepreneur for treating the animal as a “prop”.

“What could PETA possibly say that the public isn’t already thinking? Horses are smart, complex animals, not props, and you show love for them not by carving symbols on a horse but by leaving the animal in peace. If this horse suffers from toxic poisoning or has a fatal allergic reaction, Katie Price’s next photo op may well be a mug shot.”

However, a representative for Price insisted that the horse wasn’t in any danger, and that the dye was harmless and applied by professionals. “Katie didn’t dye the horse herself. This was carried out by professionals along with the horse’s handler. The dye is water-based and completely safe for animals.”

And just for a bonus, it’s the second time in the space of a week that Price has been criticised by PETA, after she said on Tuesday that she had shaved heart and diamond designs into the hair of one of her animals.