Katie Melua - It's Only Pain Video 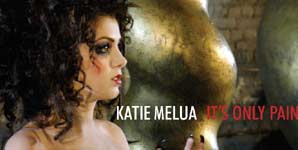 Katie Melua returns from America to release 'It's Only Pain', a brand new single. Katie has spent the last 3 months on tour in North America and appearing on high profile shows such as The Today Show and Good Morning America.

'It's Only Pain' was recently recorded at New York's Manhattan Centre Studio 4 while on Katie's recent tour of the States. The up-tempo feel of the song represents a departure from Katie's previous more ballad-orientated singles. The CD will also include an acoustic rendition of 'Lucy In The Sky With Diamonds', recorded at Abbey Road Studio 2 during a radio broadcast session, and will also include the video of 'It's Only Pain'.

Katie Melua, Its Only Pain, Video...