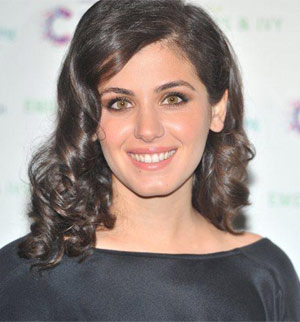 Released on her 29th birthday, on September 16th, the album title is Katie's Georgian birth name. Born in Georgiaand raised in Belfast and Surrey, Katie studied at the Brit School in south London before signing to the British independent record label Dramatico. After 2003's single 'The Closest Thing To Crazy' Katie went on to become one of Britain's most successful recording artists of the millennium selling more than 11 million albums, 1 million concert tickets and receiving 56 platinum awards.

The first single 'I Will Be There' was premiered at the Coronation Gala, at Buckingham Palace on July 11th. A beautiful tribute to a protective matriarchal figure, the song was written by Katie's longtime collaborator Mike Batt. "Mike had been commissioned to write a song for me to sing at the celebrations for the 60th anniversary of The Queen's Coronation. No small challenge...how do you write a song that is appropriate for an occasion yet relevant outside of that event? But when I first heard the song it was so special and instantly felt right, an homage to a strong, beautiful mother who is at the song's central core."

The song is a good introduction to a personal record that sees Katie return to songwriting and working with Batt and two new collaborators, Mike's son Luke (who has co-produced the album) and Toby Jepson. "It is great to be back in the studio with Mike, one of the greatest songwriters alive, who has penned some timeless new songs, and to be back writing myself. Luke and Toby brought a new dynamic to the studio....I love the creative spark that happens when the right group of people come together."

Katie's unique and astonishing voice, with a maturity and richness that has developed over the last decade, narrates tales of love and life. Having enjoyed such success with her previous albums what does Katie hope to achieve with 'Ketevan'? "I hope people enjoy the songs, the variety of ideas on this record, with romance, melancholia, with rootsy blues and then a few retro inspired jazz songs. We probably don't listen to albums in the same way we used to but I hope the full spectrum of this album gets appreciated."

"I didn't want to just sing this time and that step back to writing, back to retrospectiveness, back into the past does get nicely summarised by my extended Georgian name 'Ketevan'." 'Ketevan' rewards the listener with songs that are at times wistful and at others witty, always delivered by that transporting voice: 'This Is The Love I'm Frightened Of' "I've had those moments where I've realised this is so precious and massive I just need some knowledge of how to not mess it up!" 'Never Felt Less Like Dancing' "I can't think of a more perfect way of describing that moment of feeling like you have to be happy, happy to participate, happy to perform when it's the last thing you wanna do." 'Idiot School' "I don't think I ever want to be that serious and pretentious where I'm afraid of having humour in my music. Mike's phenomenal at clever rhymes and phrases that grab your ear". 'Love Is A Silent Thief' "A song that captures  the frustration, torture and addiction of being in love. I'm dedicating this song to a spectacular Georgian/Armenian artist, the film director Sergei Parajanov."

So looking back over the last ten years what have been the highlights for Katie? "There've been many great moments I'm really proud of, the biggest one is year after year still being asked to go on stage. To still be touring after a decade means everything to me, that goes beyond whether you're number one or not. Being on the road, playing gigs and experiencing the magic of the stage is the best part of what I do....basically just to be making music still right in front of your audience, there's nothing else in the world like it."

Following a summer of outdoor shows and festivals on the continent and, of course, the Coronation Gala, Katie will be performing a special 10th anniversary concert at The Roundhouse in London on October 2nd.