'Normal' Katie Holmes Is Like Her 'Dead Accounts' Character 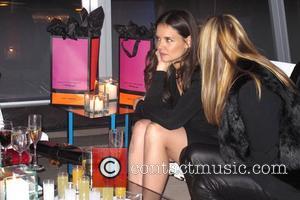 Talk about throwing yourself into your work, ever since Katie Holmes called time on her six year marriage to Tom Cruise she has thrown herself into the role of full-time mother and now, since returning to the acting circuit on Broadway, has immersed herself into her latest role too.

Her new role as Lorna, prickly dead-beat who has moved back in with her parents in Cincinnati following the collapse of her relationship, in the new play Dead Accounts - a role that Holmes told The New York Times is much closer to home than some might expect. "I'm like Lorna in that my values guide me in an instinctual way, like, 'That feels weird' or 'I better send a thank you,' " she continued "You can easily fall into thinking, 'Wow, I'm really something,' " she said. "But I believe in putting your head down and doing the work."

She may hold similar values but we've already seen that since her break-up from Cruise, Katie is far from the character as she has continually proved that she is a thoroughly competent Manhattan mother. Still, in the recent interview Holmes digressed that she does share many a similarity with her character, namely that she is just a normal person and plans on acting and being treated this way.

Recent evidence has proved her point too, with Holmes admitting her newfound love for boxed wine "It's good. And it's a lot easier to open." - This and her recent decision to ride on the subway have shown that Holmes is as eager to leave the spotlight behind to enjoy a normal life, and who can blame her.

The new play, Dead Accounts, is on preview on Broadway now.