Katie Holmes is getting rid of daughter Suri's designer wardrobe as she wants the six-year-old girl to start dressing more appropriately for her age. 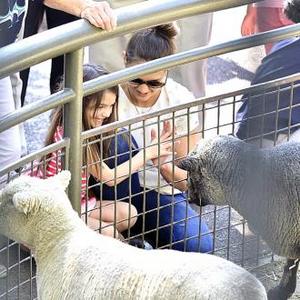 Katie Holmes is getting rid of daughter Suri's designer clothes.

The six-year-old girl is famed for her taste in expensive garments - with her wardrobe said to be worth $3 million - but now the actress wants her to start dressing in a more conservative way, following her split from estranged husband Tom Cruise.

Katie - who was given primary custody of Suri in the couple's divorce agreement - is keen for the youngster to start leading a normal life as possible so will no longer be accepting free clothes from designers.

A source said: ''Katie has been returning unsolicited gifts and loans from designers for Suri since she arrived in New York - which is to be her home base now, far away from Tom. She's issued instructions to remove Suri from all freebie lists. She's also put the word out in LA to stop any MINI-ME diva products being sent her way.''

Sources say it was Tom - who also has children Isabella, 19, and 17-year-old Connor, with second wife Nicole Kidman - who allowed Suri to wear expensive clothes because he let her do whatever she wanted.

The source continued to Reveal magazine: ''All that inappropriate dress up and make-up was down to Tom and Katie's key word now when it comes to Suri is 'normal'. Tom loved to spoil Suri and indulge her, but Katie has other ideas.''

In the past, Suri has been spotted wearing high heels, lipstick and earrings.