Katie Holmes used a disposable cell phone to initially arrange her divorce from Tom Cruise to prevent the 'Mission: Impossible' star and his staff finding out about her intentions. 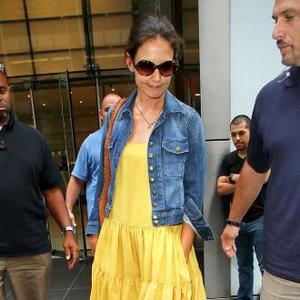 The 33-year-old actress - who split from the 'Mission: Impossible' star late last month after five years of marriage - reportedly used the throwaway gadget, provided by a friend, to start negotiations with her lawyers without him knowing.

A source told the Los Angeles Times the brunette star took the course of action to prevent Tom or his staff finding out about her intentions, which meant she was able to hire three law companies in three different states by the time a deal was agreed to end their marriage.

The pair reached a settlement yesterday (09.07.12), just two weeks after Katie initially filed for divorce from the 50-year-old star.

The 'Dawson's Creek' star is thought to be in line to get primary custody of their six-year-old daughter Suri, with Tom allowed visitation rights.

Katie is also said to have insisted that Suri is accompanied by her own team of bodyguards when the youngster visits the actor to ensure she isn't indoctrinated into sci-fi cult Scientology.

The pair appeared to refer to the religious aspect of their split in a joint statement, released yesterday, which stated: ''We want to keep matters affecting our family private and express our respect for each other's commitment to each of our respective beliefs and support each other's roles as parents.''