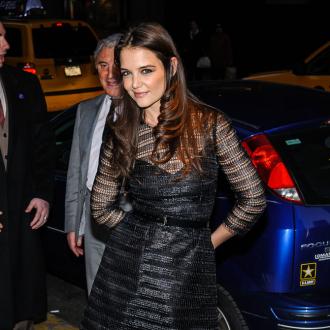 Katie Holmes is looking for a new bachelorette pad.

The 34-year-old actress - who has a six-year-old daughter Suri with her ex-husband Tom Cruise - is reportedly on the hunt for a larger apartment in New York City after almost a year of renting a two-bedroom place in Chelsea Mercantile for $12,500 per month, following her split from the 'Mission Impossible' star, 50, last June.

A source told the MailOnline.com that the brunette star is hoping to move soon as her one-year lease is due to expire and she wants to buy a plush new pad of her own in Manhattan.

The former 'Dawson's Creek' star, who is currently in Disney World in Florida with Suri, is single but hasn't ruled out having more children in the future.

It was recently claimed the brunette star was considering a career change to become a lawyer, and she hinted it could be a realistic option for her.

She said: ''Well, my brother and father are attorneys, and ... we'll see. I like the practical thinking of attorneys.''

Though Katie's last acting venture, the Broadway play 'Dead Accounts', was cancelled before the end of its run, she is still happy to have been part of the production because she was so determined to return to theatre work.

She said: ''I was open to - well, to whoever wanted me. But it was always my goal to make it back to the stage.''