Katie Holmes Teaches Suri How To Ride A Bike In Manhattan 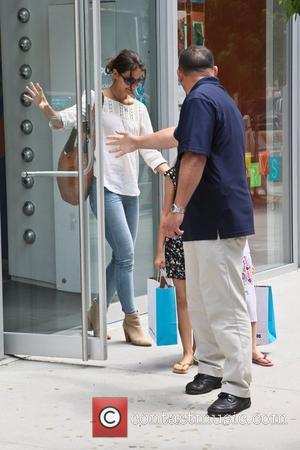 Following her split from Tom Cruise, it looks like it's down to Katie Holmes to teach daughter Suri how to ride a bike. The Hollywood actress was spotted with her 6-year-old on the bike path of the West Side Highway in Manhattan over the weekend.
Wearing red shoes and a pink helmet, Suri nervously rode her bike along the path while Katie - wearing a t-shirt and jeans - held her firmly. At one point, Katie took a phone-call leaving Suri looking pretty impatient to begin her lesson again, getting off her bike and sulking on the sidewalk. After the lesson- in which Suri seemed to pick up cycling pretty quickly - the pair relaxed by a fountain and chatted for a few minutes. Katie Holmes filed for divorce from Tom Cruise earlier this year, apparently "blindsiding" the actor who was unaware that his wife wanted to split. The former couple released a joint statement, saying, "We are committed to working together as parents to accomplish what is in our daughter Suri's best interests.We want to keep matters affecting our family private and express our respect for each other's commitment to each of our respective beliefs and support each other's roles as parents".
Some reports had suggested that Katie Holmes' Scientology beliefs (or lack of) had impacted on her decision to split from the actor. The 'Mission: Impossible' star is understood to be among the key players in the Church of Scientology - Rupert Murdoch claimed he was second or third in the overall hierarchy.