Katie Holmes is reportedly not ready to date yet, despite getting very close to her 'Mania Days' co-star Luke Kirby. 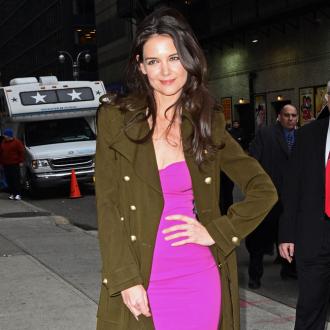 Katie Holmes is still getting used to being single.

The 34-year-old actress - who split from Tom Cruise last June - has told friends she is almost ready to start dating again amid rumours she has recently gotten close to her 'Mania Days' co-star Luke Kirby.

A source informed In Touch magazine: ''She's just getting used to being around guys in that way again.''

Katie likes spending time on set with Luke, but friends have dismissed speculation they are dating because he has a ''long-term girlfriend.''

The insider added: ''She's not ready to date yet, but she's starting to think about it.''

However, the 'Dawson's Creek' star has amazing chemistry with the handsome actor according to eye-witnesses on set, who believe the pair are trying to play it cool in front of the press for the time being.

A source told America's OK! magazine: ''The word on-set is that they are hot and heavy - you can totally tell the chemistry between them. Katie obviously has it bad for Luke!

''They're desperate to keep the state of their relationship under wraps until it's at least had a chance to start.

''That's why they tried to evade the paparazzi in NYC on their dinner date - they knew if they were spotted out together away from the set, all hell would break lose.