Katie Holmes serenaded her husband Tom Cruise during a sexy stage performance of 'Whatever Lola Wants' at a charity benefit on Saturday (01.05.10). 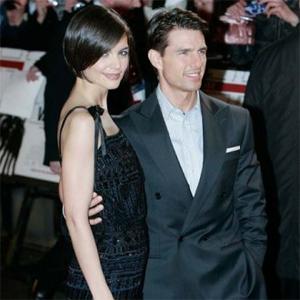 The 'Thank You For Smoking' actress - who has a daughter, four-year-old Suri, with her husband of three years - dressed in a floaty black halter-neck dress as she belted out 'Whatever Lola Wants' at The Motion Picture and Television Fund's A Fine Romance Benefit at 20th Century Fox in Century City, California.

An onlooker said: "It was quite a raunchy routine. Katie ruffled Tom's hair, hitched up her skirt and at one stage even pushed him to the floor!"

The 31-year-old actress strutted around to the musical number - which was from the musical 'Damn Yankees' - while a pianist accompanied her vocals and Tom portrayed her feuding love interest.

Sitting centre stage whilst wearing a white shirt, the 'Valkyrie' star sat on a bench while the brunette beauty ran her fingers through her spouse's hair, swished her ruffled skirt and gazed at him passionately.

The performance ended on a romantic note when the 47-year-old actor took Katie in his arms, kissed her and leant her back in a seductive embrace.

While the crowd burst into applause, the pair grinned to one another, curtseyed and left the stage hand-in-hand.