Katie Holmes would not mention her husband Tom Cruise by name in an interview she carried out just one day before she announced her intention to divorce him. 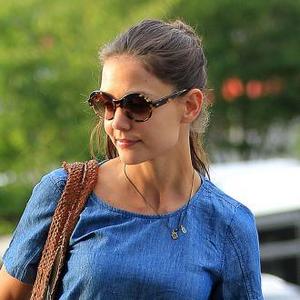 Katie Holmes refused to mention Tom Cruise in an interview she conducted a day before she announced her split from him.

The 33-year-old actress took part in an Q&A session with C magazine's senior editor Kelsey McKinnon just one day prior to announcing her divorce from the 'Top Gun' actor in June and Kelsey believes she was particularly guarded, never mentioning her husband by name.

Kelsey told WWD.com: ''Going back over the tapes, there were signs; Holmes was certainly very aware of herself, laying a couple of cards on the table but never showing her whole hand.

''Most noticeably, the one name decisively absent from her lexicon: Tom Cruise. She never actually refers to him by name over pages and pages of transcription.''

During the interview, Katie said she ''didn't know'' if having six-year-old Suri with Tom had brought them closer together as a couple.

However, the former 'Dawson's Creek' actress was happier to discuss her career, saying she was ready to take on some more challenging parts.

She said: ''I feel like I worked so much at such a young age that I really wanted to have life experiences. I feel more balanced and like I have more to bring to the table.

''I always felt like I wanted to catch up [in my personal life] to what I was doing [in my career].''