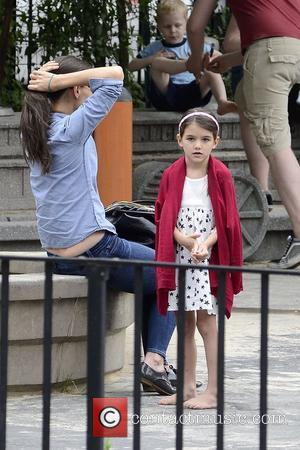 Katie Holmes has signed a lucrative deal to be the new face of Bobbi Brown cosmetics. According to the New York Post, Holmes has been in talks with the Estee-Lauder owned company for several weeks, and finally penned the deal on Tuesday (September 4, 2012).
A split from Tom Cruise seems to have opened up numerous opportunities for Katie Holmes, on and off-screen. The latest deal is hugely lucrative for the actress, with one source explaining, "The deal was signed on Tuesday. It's a huge beauty contract for Katie, one that will make her the face of Bobbi Brown but also allow her to bring some of her own creativity to the company, like many of the celebrities who have worked with Mac. She will collaborate with Bobbi Brown, and appear in ads early next year". Another source revealed that Katie was in the office "all day" on Tuesday hammering out the deal, and chatting with Bobbi herself, adding, "Everyone thought she was very, very nice". Holmes is thought to be working hard through New York Fashion Week to expand her business empire, following her recent divorce. She presented the Designer of the Year Award to Carolina Herrera at last night's Style Awards at the Lincoln Center.
Holmes' acting career - which has nosedived over the past couple of years - was recently given a boost after she signed up to star in the Broadway comedy 'Dead Accounts'. She will also star in a modern adaptation of Chekhov's 'The Seagull'.