Katie Holmes and her six-year-old daughter Suri have been involved in a minor car accident in New York last night (16.07.12). 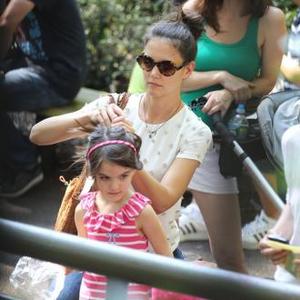 Katie Holmes and her daughter Suri have been involved in a car accident.

The former 'Dawson's Creek' actress and her six-year-old child were riding in the back of a black Mercedes sedan when it was struck by a dump truck in New York yesterday (16.07.12) evening.

No one was reported hurt in the incident, which onlookers say was minor.

One source said: ''It was nothing major other than the fact that it was Katie Holmes.''

Police arrived on the scene and noted the actress' chauffeur-driven vehicle had sustained a large dent and several scratches to the rear driver side panel after the Volvo truck - from Classic Sanitation Recycling New York Corp - had apparently backed into the luxury vehicle.

Katie - who filed for divorce from her daughter's father, actor Tom Cruise, last month - and Suri were not seen at the scene of the crash.

Following her split from Tom, Katie has secured primary custody of their little girl in an undisclosed divorce agreement.

It was recently revealed she has enrolled Suri into New York's Convent of the Sacred Heart School - where former pupils include Lady GaGa and Paris Hilton - because the actress wants her daughter to have a Catholic education, rather than being taught at a Scientology school as the 'Mission: Impossible' star desired.