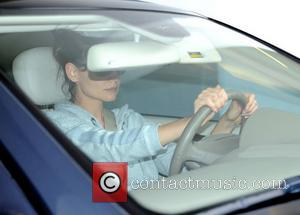 Katie Holmes' forthcoming horror movie 'Don't Be Afraid of the Dark' is set to be released on 12th August 2011.
KATIE HOLMES, the American actress and wife of Hollywood actor Tom Cruise, is set to star in the forthcoming horror movie 'Don't Be Afraid of the Dark', which will hit cinemas on 12th August 2011, reports Entertainment Weekly.The movie, which has been written and produced by Guillermo Del Toro, was initially delayed back in October 2010 when Disney was in the process of offloading Miramax. The film is directed by TRON NIXEY and is based on the 1973 made-for-television movie of the same name, which Del Toro often cites as the 'scariest' movie ever made. The plot follows a young girl, played by Bailee Madison, who hears voices coming from the hidden cellar of her Rhode Island home, which she recently moved into with her parents, played by Guy Pearce and Holmes. MIKE LANG, CEO of Miramax said in a statement, "We're very pleased to partner with FilmDistrict to bring Don't Be Afraid of the Dark to U.S. audiences. GUILLERMO DEL TORO has crafted a true thriller that exemplifies the type of high-quality films for which Miramax is known. We are thrilled to add it to our growing library and we look forward to maximizing its U.S. theatrical and long-term potential."
Holmes will also star in the television mini-series 'The Kennedys', which is has been picked up by 'ReelzChannel' after being rejected by FX and The History Channel. The series will begin airing on 3rd April 2011.