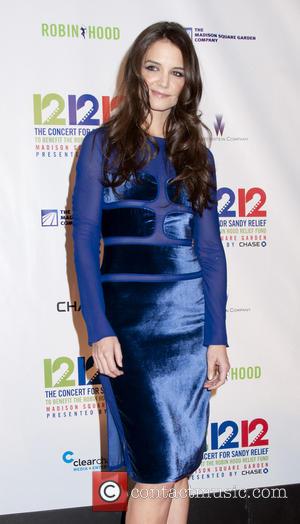 Katie Holmes feasted on cakes and eggs for her birthday breakfast meal only a day after taking daughter Suri out cake decorating.

The 'Dawson's Creek' star and her 6-year-old daughter hit bakery and bistro Sugar and Plumm in the Upper West Side of Manhattan on Tuesday (December 18th 2012) to celebrate her 34th birthday. She reportedly ate pancakes and eggs benedict and was presented with a custom made cake by pastry chef Pichet Ong. This isn't the first time the actress has been spotted enjoying cakes. It was only Monday (December 17th) when she was seen taking Suri and a group of her school friends out to go cake decorating at New York's Georgetown Cupcake 'holiday cupcake decoration workshop' according to a source in Us Weekly who also mentioned, 'The kids got messy!'

They obviously couldn't get enough of the fun as they had also attended the same workshop on December 9th. The kids were allowed to take what they had made home with them and Katie took hers to share with the cast of her new Broadway comedy show 'Dead Accounts'. The company were happy to have the mother and daughter become their latest celebrity fans and took to Twitter to comment on their excitement: 'So much fun having Katie, Suri and friends for cupcake decorating at Georgetown Cupcake'.