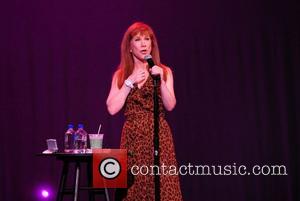 Comedian Kathy Griffin has found love with a man nearly 20 years her junior.
Griffin, 51, met 33-year-old Randy Bick, a newspaper marketing manager, at the Los Angeles Food & Wine Festival back in October (11) and the couple has been dating ever since.
A source tells the National Enquirer, "Kathy liked the fact that Randy was a foodie like her... and he wasn't a star. She's dated a lot of celebrities in the past and was glad to have landed a 'civilian' for a change. Randy and Kathy are taking the relationship slow and easy - and loving it!"
The My Life On the D-List star only recently acknowledged she was in a relationship, but kept her boyfriend's identity a secret, telling now-defunct U.S. talk series The Rosie Show, "He's a really nice normal guy with a nice normal job who doesn't care for the spotlight. I like it that way and he does too."
Since her divorce from Matt Moline in 2006, Griffin has been linked to commercial actor Isaiah Mustafa and Apple co-founder Steve Wozniak.