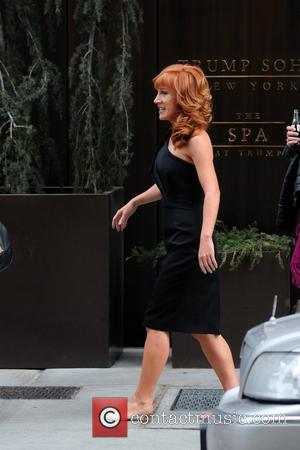 Kathy Griffin has shocked audiences by stripping for a second time on live TV. Kathy Griffin appeared on David Letterman's 'The Late Show' when she flashed her body again.

The 51-year-old comedian originally made the headlines when she showed off her body during CNN's New Year's Eve broadcast. Griffin had stood next to a 'no nudity' and 'no swearing' sign at New York's Time Square wearing just her bra. Now appearing on The Late Show on Friday (20 Jan 2012), Letterman asked her about how the controversial joke had went. Griffin stated: 'Well it went well for me. But every year I try to up the ante because, you know, I've done it for five years now and I've been fired four years in a row'. The comedian then offered to repeat the act for Letterman's audience: 'I mean, David. I'll do it right now'. In on the joke, Letterman further asked Griffin if she needed help as she began to unclip her black strapless gown and pull it down to her waist.

The joke caused many internet bloggers and sites to joke that even though her body was supposedly in good shape, Griffin couldn't keep her clothes on. Kathy Griffin recently made guest star appearances on 'Drop Dead Diva' and smash-hit musical show 'Glee' this year.