Kathy Griffin Handcuffs Herself To Anderson Cooper On Live Tv 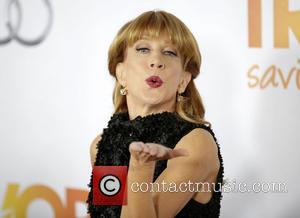 The funnywoman returned to Times Square in New York City for the seventh year in a row to co-host the news channel’s live year-end event with her good pal Cooper.

In previous years, Griffin stunned the anchor and viewers alike by stripping down to her bra, simulating sex acts and swearing on live Tv, so on Tuesday (31Dec13), the newsman made Griffin sign a large poster which read, “No Swearing, No Stripping, No Touch, No Simulations.”

Griffin signed the faux contract - as Miley Cyrus - and proceeded to surprise her co-host yet again by snapping handcuffs on him and declaring she did not have a key.

The odd couple spent an hour of the show linked together, prompting Cooper to groan, “This is truly my worst nightmare. I will gnaw off my hand... I don’t want to start the new year handcuffed to you.”

Cooper later took to Twitter.com to assure viewers security personnel were able to separate him and Griffin.