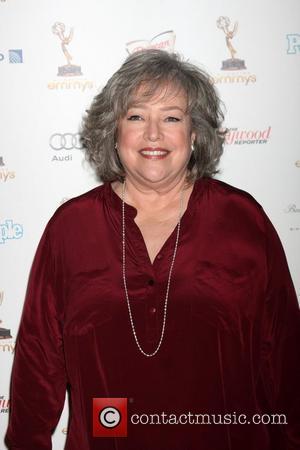 Oscar-winner Kathy Bates sank into a deep depression after beating ovarian cancer as she struggled to return to the "complexity of life" following her health scare.
The Misery star was diagnosed with the disease in 2003 and underwent rounds of chemotherapy, but when doctors finally gave her the all clear, the actress admits she was thrown into a downward spiral as she battled to overcome emotional issues.
She tells CNN host Piers Morgan, "It took me a while (to recover) because right after it, I went through a depression, which I'm hearing now is more and more common. As more and more people survive, it's more and more common for people to get through that (cancer) and, for some reason, go through a depression. I don't know if it's a reaction to the chemo or whatever they've been through...
"It's sort of like OK, I am going to survive. Life does come rushing. Life becomes very simple when you're facing just the one thing. Then when you have to go back to the complexity of life, it's a bit overwhelming."
Bates reveals the harsh cancer drugs also took a huge physical toll - she now has to use hearing aids after going partially deaf.
She adds, "I lost my hearing a little bit... From chemo. Apparently... some of the things (drugs) that I was on can damage the hairs on the inside of the ear and that's it."