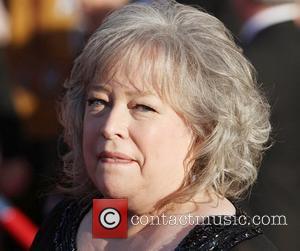 Kathy Bates "lost faith" in James Cameron's epic Titanic during the lengthy movie shoot and worried the blockbuster would turn into a big-budget bomb.
The actress, who played socialite Margaret 'Molly' Brown in the 1997 hit, admits it was difficult to trust in director Cameron's vision after the Titanic shoot began to drag on.
And Bates insists she was stunned after the historical drama went on to win Oscar gold and become the best-selling international release of all time - because she had convinced herself it would be panned by critics.
She tells Entertainment Weekly, "There was a long shoot, and a lot of people thought that it was gonna be a disaster movie of another kind, that it was never gonna make any money...
"We got a very funny Christmas card that year, because the shoot kept going on and on. Of course, they had to bring another studio onboard to get everybody paid. I can't remember his name now. It was such a funny card: It was a picture of himself, there was a bowl of soup under his nose, and in it, the Titanic was sinking, and he said 'Merry Christmas.'
"I think we all sort of lost faith at times, and thought, 'Oh, here we go. This is just gonna be the biggest bomb.' But Jim (Cameron) was right."
Cameron has used new technology to update Titanic, which is being re-released in 3D to mark the 100th anniversary of the luxury liner's fatal maiden voyage.