The last ten years of Kathleen Edwards's life reads like a Jackie Collins novel to some degree. A talented musician struggling to make ends meet falls in love and marries a highly regarded record producer, makes three critically acclaimed albums while in the meantime the relationship falls apart. A messy divorce ensues only for said heroine to collaborate and eventually fall in love with a fellow esteemed musician, the fruits of which undoubtedly form the basis of what is arguably her most commercially accessible record to date. If only the complications of life were that simple, eh? 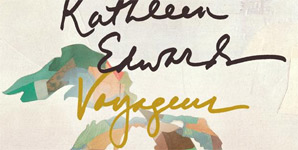 Of course that only tells a brief outline of the story when in all fairness, Kathleen Edwards star has been waiting to emerge for a while now. A talented classically trained musician who spent her teenage years travelling between her native Canada to such varied outposts as Korea and Switzerland and back again. Having released her first EP as far back as 1999 at the tender age of nineteen, her music has regularly been cited as being "about to break" or "on the precipice of greatness" for many years. Whereas debut long player 'Failer' and its successor 'Back To Me' cast her in a more stripped down, alt-country kind of vein, album number three 'Asking For Flowers' revealed a darker side to her make-up, the majority of its songs set in the third person while referencing several real life occurrences such as the murder of an adopted Canadian girl in 2005.

With 'Voyageur', Edwards's world has almost turned full circle. Fresh from her divorce after a seven-year relationship with producer Colin Cripps - of which several of the songs here candidly refer to - Edwards musical style has also undergone something of a transformation in the process. No longer the country girl many critics had already generalised her as being, there's a new sense of world-weariness about Edwards that shines throughout 'Voyageur''s ten pieces. While there's little doubt some of this can be attributed to the influence and input of Justin "Bon Iver" Vernon, 'Voyageur''s producer and also Edwards' current beau, her development as a songwriter and arranger cannot be underestimated either.

Take the opening 'Empty Threat' for example, where Edwards intones she's "Moving to America" like a modern day Juliana Hatfield. Or the delicately poised 'Mint', a song that wouldn't sound out of place on Catatonia's 1998 opus 'International Velvet'. Edwards dulcet tones punctuate the latter's breezy steel guitar waltz with such cutting lines as "God doesn't know you like I do" assuring the listener she's not to be messed with in any way, shape or form.

At times the country influence of yore does rear its head, albeit briefly on the plaintive 'Pink Champagne' or 'A Soft Place To Land', which isn't a million miles away from Bon Iver's 'Blood Bank' in structure if truth were told. Closer 'For The Record' is shrouded in a similar opulence to Sarabeth Tucek's harrowing 'Get Well Soon', Edwards opining "I was taught to bite my tongue, hang me out to die in the sun", while the drum heavy pervasiveness of 'Sidecar' suggests a ray of light emerging at the tunnel's exit after all.

While an uneasy listen in many ways, 'Voyageur' highlights Kathleen Edwards's unerring ability to convey her innermost thoughts and emotions with consummate ease via the medium of popular music. An understated gem, but one which should figure prominently when 2012's "Best Of" lists are compiled in eleven months time. 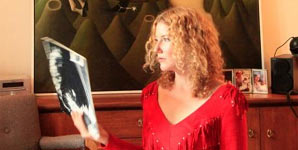