Opera singer Katherine Jenkins and partner Mark Ballas topped the leader board in the opening show of 'Dancing With The Stars' last night (19.03.12). 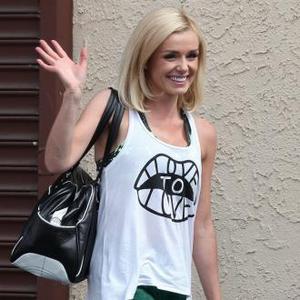 Katherine Jenkins topped the leaderboard in the opening show of 'Dancing With The Stars' last night (19.03.12).

The Welsh opera singer scored 26 out of 30 for her foxtrot with partner Mark Ballas, hailed the ''best first dance on the first episode ever'' by judge Carrie Ann Inaba.

Panellist Len Goodman backed up Carrie's comment, reducing Katherine to tears when he told her ''You're setting the bar so high that really you have a lot to live up to.''

Actor Jaleel White and professional partner Kym Johnson emerged as the night's dual frontrunners, after they were also awarded 26 points.

The standard was high across the board for the opening show of the 14th series, with Len saying the show was: ''Without doubt the best first show of any season.''

Sherri gave the night some comedy, telling the judges: ''Short of birthing my child, this is the hardest thing I ever had to do in my life.

''I think I left a boob on the floor. If somebody finds it, could you give it back to me?''

Singer Gavin Degraw, Tennis star Martina Navratilova and 'Little House On The Prairie' star Melissa Gilbert were at the bottom of the leader board, with 20 points each.

No contestants were eliminated in the opening week, but one couple will be ejected next week after they have tackled either the quickstep or the jive.