Katherine Jenkins is reportedly being romanced by a member of a British boyband. 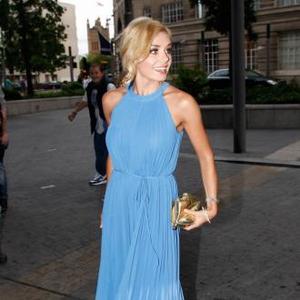 Katherine Jenkins is reportedly being romanced by a member of a British boy band.

Andy Brown from music group Lawson - whose exes include Mollie King of The Saturdays - Charmed Katherine before disappearing with her at the end of V Festival at the weekend.

A source told The Sun newspaper: ''They were strolling around backstage hand-in-hand, partying into the early hours. They'd been having a laugh all afternoon with a crowd of mates sinking cocktails. When it got really late they started kissing before disappearing from the party together.''

However a spokesperson for Katherine denied they were romantically involved.

They said: ''They were just being friendly, having a fun time at V.''

'Xtra Factor' presenter Caroline Flack had earlier asked Andy along to the main arena to watch headliner acts Snow Patrol and The Killers.

But he apparently denied in favour of hanging out with former 'Dancing With The Stars' contestant Katherine for the night.

Lawson travelled to Brussels for a gig hours after the party.

Andy tweeted: ''Hungover to death... Hope everyone enjoyed V Festival this weekend! Defo one of the best weekends I've had in a while!''