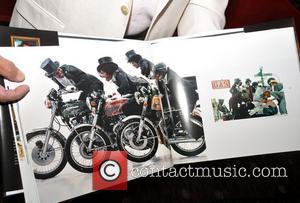 Katherine Jackson's business partner has been forced to apologise to fans after stating the Jackson family matriarch had released an unheard song by her late son MICHAEL.
Katherine was said to have given her blessing for Opis None to be made available on Saturday (06Nov10) on JacksonSecretVault.com, the website run by her partner Howard Mann.
A message on the site read: "We (would) like to present a free, authentic, unreleased MJ track for the fans. With L.O.V.E from Mrs. Jackson."
But members of the Jackson family were adamant the 80 year old hadn't approved the latest release, with Jackie Jackson taking to his Twitter.com account to state, "I just spoke with my Mother and she did NOT authorise the release of the demo track called Opis None."
Now Mann has backtracked on his original statement, admitting the song was not a gift from Katherine, nor "unreleased" as previously advertised, but rather a remake.
A revised post on the website reads: "From the archives of Jackson secret vault, we'd like to present a free authentic remake MJ track for the fans.
"This track was NOT released by Mrs. Jackson, this is a dance remake created from unreleased masters in the JacksonSecretVault.com archives. We sincerely apologise to the fans for any confusion."