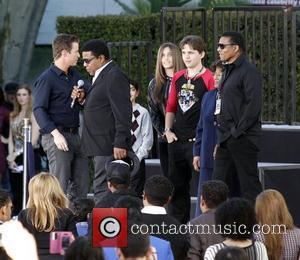 JACKSON family matriarch Katherine Jackson's health has sparked a secret custody battle for her late son MICHAEL's three kids after she fell down a flight of stairs at her home in California.
The 80 year old won custody of Paris, Prince Michael and Prince Michael II following the King of Pop's death last summer (Jun10) - but sources insist she's too old and frail to look after the kids.
America's Globe tabloid reports Katherine was hospitalised after the fall on 17 May (10), but escaped with only cuts and bruises. However, the accident has sparked concerns for her health.
A family insider tells the publication, "She's taken on way too much for a woman of her age but refuses to delegate the care of her grandchildren to others.
"She has aged enormously and is desperately hanging on for the sake of her children, but her collapse on the stairs shows how fragile she really is."
And the source fears that the upcoming anniversary of her son's death will be too much for Katherine - and that could be devastating for the Jackson clan.
The insider adds, "She's the glue that holds the whole family together. If something happens to her, it would be all-out war."
In his will, Michael Jackson suggested his pal Diana Ross should get custody of his three kids if his mother was incapacitated or dead at the time of his passing, but the Globe reports the three children's cousins, Jacksons brother Tito's kids Taj and T.J., are favourites to land custody of Paris and the Prince Michaels if anything should happen to Katherine.
The kids' aunts Janet and Rebbie are also potential guardians, along with Michael's ex-wife Debbie Rowe, the birth mother of Prince Michael and Paris.