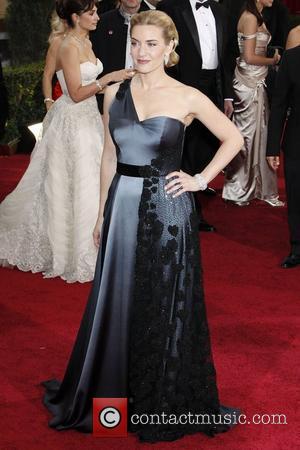 Oscar winner Kate Winslet has brushed off criticism of her recent Academy Award acceptance speech after failing to pay tribute to movie producer Harvey Weinstein.
The British beauty, who was previously nominated five times, finally won the Best Actress honour at the prestigious Hollywood ceremony last Sunday (22Feb09), claiming gold for her role in The Reader.
But Winslet has been singled out for forgetting to thank Weinstein, who pushed to have the drama, about an illiterate Nazi prison guard, released in time for consideration at the Oscars.
He clashed with producer pal Scott Rudin over the film's December (08) release date - because Winslet's other Rudin production, Revolutionary Road, was also set to hit cinemas at around the same time.
Weinstein won the battle and Rudin subsequently withdrew his name from the movie's credits.
And Winslet has come under fire for failing to acknowledge Weinstein's efforts to get the film released early - but her publicist insists it was simply a mistake.
The actress' representative, Heidi Slan, tells the Los Angeles Times' GoldDerby.com website, "I am sure this was an oversight considering she thanked him at SAG and BAFTA."
Winslet received critical acclaim at the Screen Actors Guild Awards (SAGs) and the British Academy of Film and Television Arts Awards (BAFTAs) earlier this year (09), taking home the Best Supporting Actress and Best Actress prizes at the respective events for The Reader.