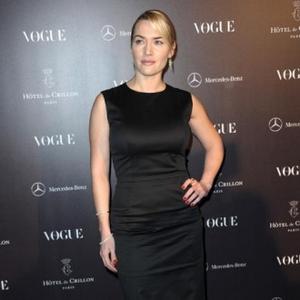 The 'Revolutionary Road' actress paid tribute to the legendary fashion photographer's ability to present women in the nude for shoots, and his ability to make them feel at ease with their bodies.

Presenting the photographer with a Lifetime Achievement award at the El Museo del Barrio gala in New York last week, Kate said: "You know that his biggest strength without fail is making women look beautiful. When Mario turns to you and says, 'It's beautiful, but I think it would work better naked, no?' How can one refuse?

"No matter what insecurities about oneself a subject may have, Mario makes them go away like a magician.

"One moment you are in The Hair and makeup chair fully clothed and wishing you had smoother skin, longer legs and smaller feet and then Mario comes in and in that charming way he takes you by the? hand and says, 'Don't worry it's going to be amazing.'"

The photographer - who, in addition to his celebrity work, was behind the lens to take the official engagement photos of Britain's Prince William and Kate Middleton - said he has built up a certain level of trust in his industry which he believes makes it easier for him to convince people to pose au naturel.

According to People.com, he said: "I said to [Kate], I want you to pose nude for this exhibition. And she was like, 'Oh, OK, Mario.

"She said yes right away. Most of them, I think, trust me. I would never let them down."