Guy Pearce admitted he never expected to win an award for getting to ''have sex with Kate Winslet'' during his acceptance speech at the Emmys last night (19.09.11). 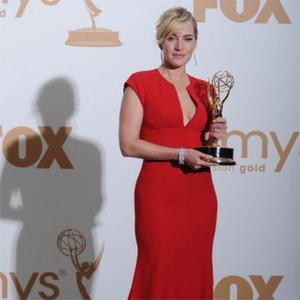 The actor picked up the trophy for Best Supporting Actor in a Miniseries or Movie for his performance in 'Mildred Pierce' at the ceremony at Los Angeles' Nokia Theatre last night (18.09.11) and told the star-studded audience he never expected to win anything for having "sex" with his co-star Kate.

He quipped: "This was really a delightful experience making 'Mildred Pierce' I got to have sex with Kate Winslet many, many times. And I didn't realise it was going to result in this, so Kate I share this with you because you're an extraordinary woman, thank you, for allowing me to insert myself into your world of Mildred."

Kate loved Guy's cheeky remarks and admits she was just thrilled to work with him on the series - which is set in the Great Depression and is based on the novel James M. Cain - because he was her teen crush.

Speaking backstage about Guy's speech, the 35-year-old actress - who won the Best Actress in a Miniseries or Movie prize for her role as the show's titular character - said: "I was thrilled! I've had a crush on Guy Pearce since I was 11 years old, so just to stand in the same room as him was thrilling for me and to hear him say that was even more of a buzz."

The big winners of the evening at the 63rd Primetime Emmy Awards were comedy series 'Modern Family' and period drama 'Downton Abbey' who both took home four accolades each.